on Saturday 10 May 2008 - 18:45:38 | by SHAFI
Islamia Eye Hospital, in association with the Institute of Architects
Bangladesh [IAB], recently organised an open architectural design
competition for extension its building located at Farmgate, Dhaka.

The award giving ceremony and exhibition of the submitted projects
was held on 10 May 2008 at 7.30pm at the Bengal Gallery. Prof. AMM
Safiullah, Vice Chancellor,BUET and Mr. Mahboob ul Alam, former
Advisor to the Caretaker Government and Editor, The Independant
were present as Chief and Special Guests respectively. Ar. Mubasshar
Hussain, President, IAB also spoke on the occasion.

The winners in the competition were- 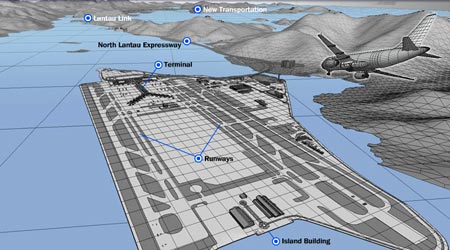 Sir Norman Foster often shows us the new dimensions in architecture achieved through outstanding technologies. It gives us a fresh enthusiasm to think beyond our conventional boundaries of thinking about ‘architecture what it can be’.
On July 6, 1998, Hong Kong opened its new international airport 16 miles out at sea. But first, engineers had to build not only the largest passenger terminal on earth, but a whole new island to hold the airport, and miles of tunnels, bridges and roadways to connect it to the mainland.
The passenger terminal of this airport claims to be the world's largest enclosed space with 70 moving walkways stretching more than two miles, a pilotless electric train, 150 shops and a 1,100-room hotel.
The airport’s twin runways, each more than 2.3 miles long, can support up to 49 flights per hour. The airport handles 45 million passengers a year nowadays, but that figure can be nearly doubled to 87 million!
The flat island housing Hong Kong International Airport was actually two mountainous islands when construction began. But the mountains were pulverized and their rocks recycled to fill 1.5 miles of sea now connecting Chek Lap Kok and Lam Chau. A whole new six-lane expressway, utility and rail corridor hugs Lantau Island’s rugged coast. Like many of the new projects, it required extensive blasting and land-filling to build. 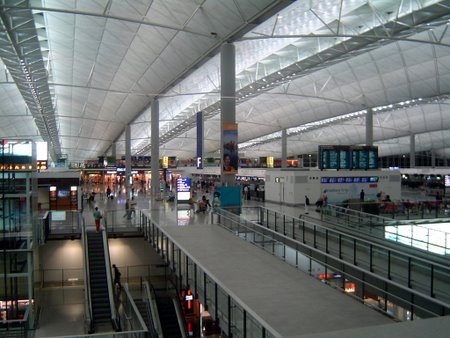 So the visual story of planning and building this master piece work of architecture and engineering would worth to see for sure. AIUB (American International University, Bangladesh) Department of Architecture arranges the opportunity for you to experience the thrill in movie screen through the Documentary on ‘Extreme Engineering : Building Hong Kong’s Airport, Architect: Norman Foster’ directed by Jennifer Lorenz.

From 20th June to 20th July the London Festival of Architecture this Summer will be the biggest event of its kind in the world. It will involve all the major players in London’s environment including the Mayor, Design for London, local authorities, officers and members, and major developers, not to mention some of the world’s leading architects.
CLICK HERE to visit the event Website.

In this mega event under the roof of London Tent, The Workspace Group Declared a competition which may become an opportunity for those who are innovative designers but are suffering from lack of exposure and even money to participate events like this!
The Workspace Group Urbantine Project® emerged from the realization that there are limited opportunities for unrecognized architects to showcase their ideas three-dimensionally. Tent London’s fast architecture competition seeks to redress this issue, affording the winning entry the chance to put their design in front of the world's press and the industry’s most influential players during London Design Week at Tent London, Truman Brewery, Brick Lane. The winning entry will also have the opportunity to engage with an organisation, Workspace Group, which aims to provide progressive, appropriate, affordable and considered workspace accommodation for London’s creative industries.

Project Brief
We want you to tackle the issue of rapid change in the 21st century workplace, such as the phenomenal rise in the use of digital technology and its impact on our work and office environments. Tremendous claims are made as to its possible effect on our communication, social interaction, mobility, productivity and creativity.
Prize:

(Information taken from official sites of the events, ArchSociety doesn't claim any ownership of any logo or image published in this news item)