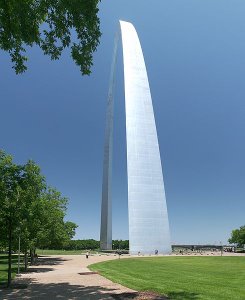 The Gateway Arch of St. Louis by Eero Saarinen is definitely one of the greatest examples of architectural infill in public urban spaces so far. In September 1947 Saarinen’s design won the competition of designing a memorial for Thomas Jefferson in the National Park of St. Louis on the Mississippi River bank framing downtown St. Louis on the West and Illinois on the East side of the river. The jury of that competition chose the 630 feet high stainless steel arch designed by the short-lived genius Eero Saarinen.
Now for the first time in a half century the National Park Service calls a design competition to better “frame” this modern masterpiece. This competition aims to invite world’s best designers to weave it back into the fabric of the city and the region, rejuvenate the connection, welcome and draw people for repeated visits and re-energize the region for living, working and visiting with a target of finishing the construction of new design by October 28, 2015 on the 50th anniversary of the competition of the Arch.

The deadline for registration is approaching. So interested designers, firms should register soon to participate in this competition which is obviously treated as one of the most important competitions of the decade.
Visit the competition website for details: cityarchrivercompetition.org
To know more about the Gateway Arch you may visit: Gateway Arch on Wikipedia
You may visit the site on Google Earth: Download Site Location KMZ. 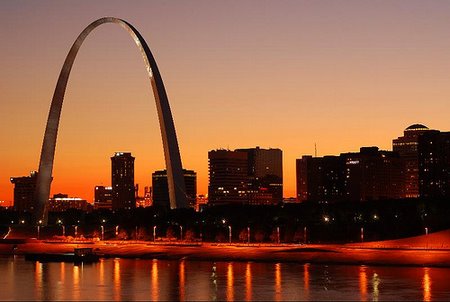 Gateway Arch in the dask 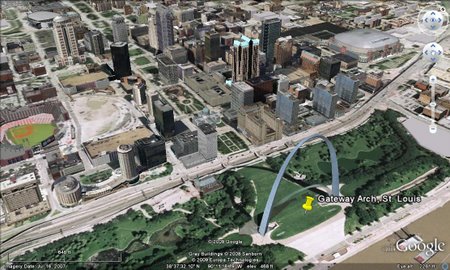 Where are the urban designers contribution to Google Earth?! Do something for at least "Model Your Town Competition" 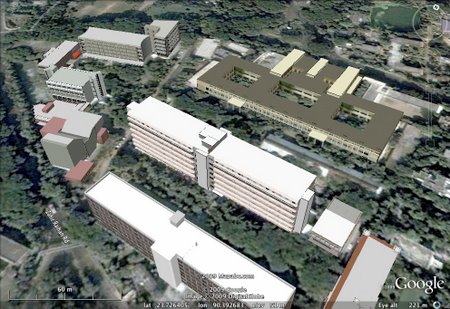 Architects and urban designers will always give heartiest thanks to Google for making something like Google Earth so accessible to everyone. It helps us in hundreds of ways! And in that endeavor of Google taking over @Last Softwares's Sketchup was another game changing and immensely helpful venture for designers and planners.
Whatever development we may think about a city or a region firstly we will need a lot of data on the existing infrastructure and the social activity pattern. Most of the data and the layers in Google Earth are contributed by the users from around the world. Where are the urban designers and architects? We see no 'layers' on urban design or future planning of cities in Google Earth or anywhere (if there's any I'm sorry I never heard of).
The exact model of current infrastructure and social activity situations is inevitably necessary. Specially in the developing nations these data could save huge time and efforts for urban design. We need the models of 'fastest growing poorest cities' (like Dhaka, Delhi, Mumbai, Lagos...). We need the existing model and our future planning layers on it. Architects and urban designers should start working in these stuffs to help Google Earth become a better tool for urban designers and planners.

By the way Google Sketchup calls for a competition entitled "Model Your Town Competition". Think of making some groups and start making model of your cities... it would be an amazing contribution to everyone whether someone wins the competition or not. CLICK HERE to join in or get information about this competition from this page. Deadline of submission is March 1, 2010.

on Tuesday 27 October 2009 - 05:49:58 | by NEO
ArchSociety News received a press release yesterday from IAB (signed by Mamnoon Morshed Choudhury) about an interesting design competition. Its about designing the Entry Gate and the Torch of 11th South Asian Games. We are quoting the copy of the letter as it was sent:
"The 11th South Asian Games is going to be held on 29 January 2010 and the Organizing Committee of the Games has approached IAB on 24.10.09 to very quickly organize an Open Competition for Design of the Entry Gate and Torch at the Bangabandhu National Stadium, Dhaka.

The Entry Gate and Torch of an international sports event is always a significant symbol of the event. The Torch will be the main focus of the inaugural and closing ceremonies. Therefore, a design that symbolizes the spirit of the South Asian Games and the host country Bangladesh, will be a very prestigious one.

As you can understand, the timeline is very short and the competition has to be organized within the time constraints. After selection of the design, contractor appointment and construction work has to commence within shortest possible time. We have been informed that all construction works at the Bangabandhu National Stadium needs to completed by 15.01.10. As such, the design should consider factors like time and ease of construction etc.

With the time constrains in consideration, IAB and the Organizing Committee of 11th SA Games, have prepared the outline of the Open design Competition. The salient features of which is presented below-

Participants Eligibility : Members and Candidate Members of IAB.
Number of Entries from Each Participant : Not limited
Briefing Session on site: on Tuesday, 27.10.09 at 5.30pm.
Competition Brief to be handed out to intending participants during the Briefing Session.
Competition Brief will also be e-mailed to intending participants from IAB upon request.
No prior registration is required.
Submission Requirements [in brief] : Architectural Drawings, 3D and a Model.
Prize Money :
1st Prize : Tk .2,50,000.00
2nd Prize : Tk. 1,50,000.00
3rd Prize : Tk. 1,00,000.00
The entry awarded 1st Prize shall be selected for implementation.
The award money to be paid as 1st Prize shall form one part of the design fee. The second part of the fee will be an amount of Tk.2,00,000 which will paid as Supervision Fee.
Date & Place of Submission : Within 9pm, Tuesday,10.11.09 at the office of Secretary, Bangladesh Olympic Association, Jatiyo Krira Porishod building, Bangabandhu National Stadium, Dhaka.
Jury Panel :
Ar. Prof. Shamsul Wares
Ar. Saif Ul Huq
Ar. Md. Ehsan Khan
Mr. Bashir Ahmed, Ex Secretary General, Bangladesh Olympic Association
Maj. Gen. Hamid Al Hasan, E.In.C, Bangladesh Armed Forces

Your enthusiastic participation will make the competition a success."