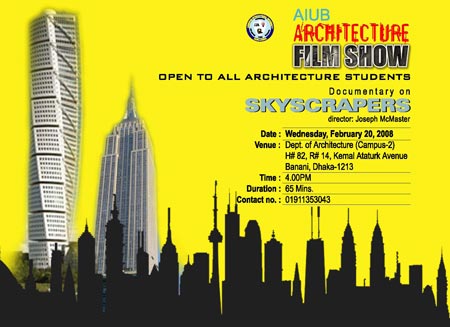 As part of that program AIUB hosts another film show on 20th February 2008, Wednesday.
The name of the film which will be shown is Skyscrapers, Directed by Joseph McMaster.
About the Movie:
This movie is a part of a series of movies entitled 'Building Big'. It includes more other movies than Skyscrapers, like Bridges, Domes, Dams and Tunnels separately. Here we'll watch only the movie on 'Skyscrapers'.

What does it take to erect a skyscraper 100 stories tall?
From the medieval towers of Italy's San Gimignano to today's race to build the world's tallest skyscraper, host David Macaulay chronicles our aptitude for altitude. On the way up, he highlights the remarkable achievements of the Gothic cathedral builders and the almost-disaster of New York's Citigroup (formerly Citicorp) Center. Program highlights: Chrysler Building, Reims Cathedral, Eiffel Tower, Empire State Building, New York City's Citigroup Center, Malaysia's Petronas Towers Program Producer: Joseph McMaster
BUILDING BIG is a coproduction of the WGBH Science Unit and Production Group, Inc., of Washington, D.C., and is presented on PBS by WGBH Boston.