on Monday 06 December 2010 - 06:55:51 | by admin
For a technical difficulty we had to delete the Facebook Page of ArchSociety along with all the posts and fans.
The page has been re-created and now fully functioning. Visit the page at http://on.fb.me/archsociety

You will need to be fan again to keep getting the timely updates from ArchSociety. We are really sorry for this inconvenience. Please be a fan there and invite your friends who might be interested.
Thanks for being with us.

The Next Generation 2011 Design Ideas Competition

This year the MetropolisMag will be gathering the best and brightest among emerging designers from which the first 'one' will emerge. This time Next Generation® Design Competition a partner is contributing the other "one" - an entire eight-story office building in downtown Los Angeles. The partner is the General Services Administration (GSA), one of the biggest landlords in the world.

Metropolis's 2011 Next Generation® Design Competition GET ZERO passes this challenge directly to the design community-- professionals in practice 10 years or less, as well as students. This year, entrants will work on a specific existing GSA office building, an entirely commonplace 8-story 1960s-era Los Angeles office building that is remarkable only for being typical of hundreds of other GSA mid-century modern buildings, scattered across the 50 states.

Next Generation: GET ZERO asks entrants to design "fixes" that will transform the existing building, bringing it to the highest possible level of performance in a memorable, beautiful, and original way. Entrants may be teams working together to transform the entire building (and its surroundings), or individuals or small groups tackling one or two individual systems and elements (facade, roof, fenestration, interior furnishings and equipment, signage and way-finding, among many other details). The entries must also focus on making the building safe, accessible, and efficient for the people who work there and the thousands of citizens who visit it. Every design specialist-at every scale of design-has something important to contribute.

on Saturday 06 November 2010 - 16:42:49 | by admin
Architects from all over the world have been invited to enter their latest projects into the 9th annual MIPIM Architectural Review Future Project Awards programme, which uniquely celebrates innovative thinking and approaches to design for buildings either still on the architect’s table or yet to be built.
The prestigious awards form a centrepiece event for showcasing exemplar architectural design and robust responses to the client brief, and will take place during the MIPIM commercial property market in Cannes next March.

The awards include eight separate categories, seven of which are open to entry, with the ‘Overall Winner’ prize awarded during the ceremony. Previous winners have included the Jean Nouvel designed ‘One New Change’ in the City of London; Isay Weinfeld Arquitetura’s 360º Building in Brazil; and SOM’s Al Hamra Firdous Tower in Kuwait, which was designed by Gary Haney. 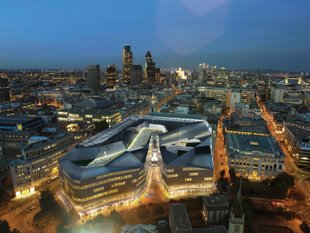 An additional Sustainability prize will be awarded to one project entered in any of the above categories. This category cannot be entered separately.

The deadline for entry is 26th November 2010. An international jury, chaired by Paul Finch, will be announced shortly.

Paul Finch, the director of the MIPIM Architectural Review Future Project Awards, said, “the Future Project Awards has an excellent track record of identifying projects which subsequently go on to be both realized and critically celebrated. We always see a wide selection of high calibre projects from all over the world, and MIPIM is a perfect opportunity to showcase the highest standards in architectural design.”

"The AR Future Project Award 2010 for the project ‘Town Town Office Tower' helped us a lot to take the next step towards realising this project. Without the international attention which the award generated, it would have been far more difficult to convince the client of the importance of an energy producing facade."